“Real success is finding your lifework in the work that you love.”
–David McCullough 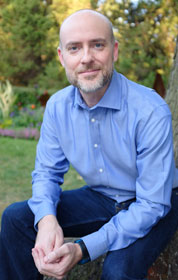 I grew up working in my dad’s surveying business, which meant spending weekends and summers outside battling the Texas heat, humidity, mosquitos, the sun, thorn bushes, poison ivy, barbed wire fences, and more. Oh how I envied my friends that earned their spending money waiting tables!

One day during my junior year of high school, my dad and I were out in the field and he started talking to me about college. He made the point that what I chose to study in college would impact my future career. All I can remember thinking was how horrible it sounded to have to work another 40+ years after college!

Although I wasn’t necessarily thinking about retirement at that time, this is my earliest memory about the importance of saving for the long-term. Through working with my dad I learned the importance of hard work, and that the money I earned was something to be to respected, not wasted.

Toward the end of college – after several years of building up a money market account and laddering CDs – I met and started dating a lovely young co-ed. One day while out eating she picked up a newspaper that was sitting on the counter next to us. She said she wanted to check on her “mutual fund.”

That moment changed the trajectory of my life.

If you haven’t guessed, that young woman was Simone. She and I got engaged two months after meeting and were married a year after that. We’ve been together almost 20 years since that day in the restaurant.

Simone’s dad took her to a financial seminar when she was 19. Among other topics covered was the importance of investing in the stock market. After the seminar they each opened investment accounts with a well known no-load fund company. That was the mutual fund she was checking on during our date.

Over the next couple of years I learned everything I could about mutual funds and investing. I subscribed to financial magazines, newspapers, and bought investment books. Up until that point I had been pursuing degrees in Biology and Spanish with no real plan about what I wanted to do for a living, but now I had found a fascinating hobby that I could turn into a career.

My first job in the financial services industry was with a large broker-dealer. My understanding of the job was that I’d be a financial advisor, and that I’d be doing the same type of work for Clients that I did for Simone and myself. I was looking forward to discussing cash flow, insurance needs, asset allocation, diversification, and all of the other aspects of a solid financial plan.

Then came the phone book and headset. There wasn’t going to be any financial planning. My job was to generate GDC (i.e., gross dealer concession, which is industry-speak for sales commissions), and I was told to start dialing and to talk to anyone that would listen to me. I was miserable.

The next job I had was as a phone rep for a no-load mutual fund company. My goal was to get as far away from sales commissions as I could, but the problem with that position was that I couldn’t give advice. I had to follow each caller’s requests even if I knew it was something they shouldn’t have been doing. This was during the dot-com crash, so I frequently had callers that would sell on days when the market was down only to buy back the same investments when the market was up. This is the opposite of what a successful investor does, and I was in a position where I couldn’t say, “No! Don’t do that!”

I decided to give up on the financial services industry at that point, so I left to get an MBA. After graduating I was approached by a representative of a broker-dealer that specialized in “fee-based” financial planning. (That term was still new in the industry at that time.) I was intrigued by the fact that I would be doing actual financial plans, so I went to work for them. Unfortunately the “based” part in “fee-based” means that there were still sales commissions to be earned and the sales pressure that comes with that environment.

Eventually the stress of recommending products and services to Clients that were different from the ones that I bought for Simone and myself proved too much to handle. Around that time Simone was presented with an amazing environmental consulting opportunity, but she would need a partner to be able to handle the workload. We both saw that as my way out, so that’s when I left financial services for a second time.

Find a Way to Do It

The consulting work was a year-to-year contract. We knew that it would last at least one year, but it ended up being extended for three. The work kept us on the road together over 200 nights per year, so we had a lot of time to discuss the question, “What do you want to do when this is over?”

We ran the gamut of business and job ideas. You name it, and we probably thought of it. My response to Simone always ended up back at financial planning and investing. I told her that I wanted to have an office (i.e., stay out of the heat!) where people could come to me with their financial questions without having to worry about me trying to sell them something. I told her that I wanted to be able to give them the advice that I’d want someone to give me if I were on their side of the table.

Simone might have said this to me on several occasions, but one night I remember her telling me, “Find a way to do it.” She said that there had to be a way to provide financial and investment advice without the “sales” aspect. That night I got on my computer and searched for what must have been hours. That’s the night I found out about fee-only planning. I discovered that it really was possible to be paid for advice, not sales!

That was early 2007, and it turned out to be the last year of our consulting contract. By October 2007 we had formed Vannoy Advisory Group and had submitted paperwork to the state to be recognized as an independent, fee-only, Registered Investment Advisor (RIA) firm. And the rest, as they say, is history!

Contact us to schedule a complimentary consultation to find out how you could benefit from working with us.